This learning journey has been curated by AmbITion Scotland Lead Consultant Hannah Rudman.

IT and digital technologies account for about 3% of the world’s global carbon footprint (CO2 emissions). But, it can help the other industries, responsible for 97% of that footprint, reduce theirs. Although not obviously huge carbon and pollutant emitters, the creative industries need to be involved with the climate change and ecological sustainability agenda. We have fabulous access to the general public who like and trust us, and can inspire change and create and invent new ways of doing and being that might not cost the earth! This learning journey seeks to inspire with case studies, and to sketch out the landscape in which digital technologies can be a tool to help organisations, practices and individuals in the arts, cultural and heritage sectors change their practices to become more ecologically sustainable.

1 Environmental sustainability - what's that got to do with culture?

When we look at the arts, culture, and heritage sector, it’s hard to see how we’re a part of the problem causing run away climate change that will likely unbalance our ecosystem.  Aside from our venues, we’re low emitters of carbon and pollutants, compared to say the built environment or transport sectors. We are though, part of the solution: read on to find out why we as a sector should lead by example.

As well as making environmentally sustainable changes to our venues (in Scotland, this work is led by Creative Carbon Scotland), there are operational choices we can make, and behaviours we can encourage our own teams and those audiences and communities around us to change. We can use digital technologies to help us encourage these changes and implement these changes.

These examples from arts, cultural and heritage organisations and practices, show how digital technologies and platforms can be used to help us as a sector and the general public who are our audience and stakeholders change our behaviours to be more ecologically sustainable.

Watch the on demand webcast of National Theatre Scotland and their co-production partner Envirodigital and support STV tak about the low carbon but national project Five Minute Theatre. This award winning production was hailed by critics for its use of digital technologies to encourage participation in performing theatre by anyone in Scotland, and the digital channel it was shown on enabled global access by everyone. The equivalent of a world tour with a large cast was given a low carbon footprint by presenting it digitally.

The tenth in AmbITion Scotland’s webinar series is an in-depth case study of the live and online production by National Theatre Scotland of Five Minute Theatre. It explores the issues and opportunities of digitizing live, cultural experiences; crowdsourcing content; and building online audiences, so is for anyone interested in those concepts, and is not specific to theatre!

The British Council hosted the Edinburgh Showcase 2011, which included a digital day, focusing on how digital technologies can be used to increase reach, access, participation with and scale of work, without creating a large carbon footprint. (Case studies session 1: Digital Theatre, NT LIve!, Watershed).  (Case studies session 2: National Theatre Wales, Sadler’s Wells, AmbITion organisation Hoipolloi & my very own Envirodigital). I talked to the international delegates about how to engage audiences internationally, but responsibly (in relation to protecting the environment).

The British Council have been hosting their Edinburgh Showcase 2011, which included a digital day, focusing on creating engaging digital content (case studies: Digital Theatre, NT LIve!, Watershed) and engaging audiences digitally (case studies: National Theatre Wales, Sadler’s Wells, Hoipolloi & my very own Envirodigital). I talked to the international delegates about how to engage audiences internationally, but responsibly (in relation to protecting the environment).

The New World Centre’s new concert hall (Miami Beach, Florida by Gehry Partners –more about the architecture spec) has embedded 360-degree video projection technology that ensures world-class classical music performances can happen without the environmental impact of touring an orchestra, conductors, and or soloists from somewhere else. 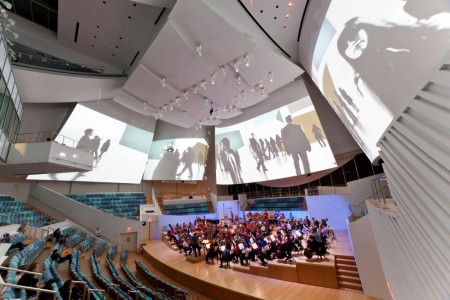 Arts & Theatres Trust Fife (now On at Fife) planned to narrowcast their pantomime to schools and hospitals across the region. This article summarises the plans.

Enjoy a Christmas show even when you’re in bed…..

Anyone who has been following the streaming groups may know that I have been working on a project with our Christmas Show. Jock and the Beanstalk. The idea came about following work with staff. We asked what did people think was a worthwhile use of digital technology. And this one popped up and everyone said let’s give it a go. I’ll be writing up the project in more detail after Jan plus some evaluation work with staff and the hospitals. So more information to follow on the ups and downs.

So here is the details.

Arts and Theatres Trust Fife (AttFife) will screen a special free performance of its Christmas show, Jock and the Beanstalk, by award-winning theatre company Wee Stories, from Dunfermline’s Carnegie Hall to children’s wards in six hospitals across Scotland, as well as transmitting it across various digital media to a wider audience.

Over the last few months we have been working closely with each hospital involved in the project to understand the needs of both patients and staff. In so doing, we have developed a tailored approach to suit each individual hospital depending on the needs of patients and their technical resources. So, for instance, in one hospital, children may be settling down to watch Jock and the Beanstalk on the large screens in their wards or playrooms; in Dundee and Glasgow, the Medi-cinema facilities can be utilized, and in others, the conference facilities usually reserved for teaching purposes, but perfectly suitable for screening and also access to the internet, will be used. The idea to apply use of the facilities in this way had simply never been considered before.

The project includes a pre-recorded performance on 21st December in the children’s wards with a live link-up via the internet to Carnegie Hall so that children can ask questions in real-time of the production team and actors. A live stream of the full show proved difficult with the consistancy of Broadband and the last thing we wanted was for the show to buffer or connection collpase.

Staff from AttFife and volunteers from each hospital will also be on hand to make the family party atmosphere spread from Fife to each of the hospitals in Scotland. Each hospital will be given a Jock and the Beanstalk Christmas fun box, containing craft activities, colouring- in pens and stickers, and there will be face-painting. The children in hospital, their families and staff, will be able to enjoy a Christmas show even though they are in hospital.

In addition to the screening in hospitals on 21st December, Jock and the Beanstalk will be shown on SOLUS plasma screens in up to 250 public waiting areas in hospitals across Scotland, the first time cultural content will be made available on this network.

SOLUS will also be providing a Web-based TV channel where the performance may be viewed on demand. This will be particularly beneficial to some children who are not well enough on the day to see the group screening, or if children simply want to catch up again with other friends and family. The staff may also want to view again over the festive period.

So 21st December is D-day for the event and then plenty of opportunity to follow up with us on how the whole process went, the highs and lows. The things we thought about and the things that were unexpected.

Arts & Theatres Trust Fife (now On at Fife)  narrowcast their pantomime to schools and hospitals across the region. This video case study captures their learnings and reflections of a successful pilot project, which used digital technologies to ensure that c. 15,000 more children saw the panto than would have otherwise been possible.

9 Towards a low carbon policy for the Creative Industries

My other company Envirodigital worked with the Scottish Government, and sector professionals in 2011 to imagine a low carbon future for the creative and interactive industries. What would our industry be like in 2020, emitting 40% less carbon? What about in 2050, emitting zero carbon? This report reveals that vision, and the opportunities and threats to be embraced along the way.

10 Towards a low carbon policy for the creative industries